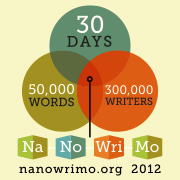 Hooray!  It is finally (almost) here: November is National Novel Writing Month, and in a few short weeks (how October does drag…) I’ll take the reigns for my seventh such buckboard wagon thrill ride.  I refer, of course, to the ridiculously ambitious challenge of cranking out a 50,000-word novel in “thirty days and nights of literary abandon.”  NaNoWriMo (for short) is a wild and crazy, caffeine- and internet-fueled combination writing contest/seminar/creativity orgy put on and promoted by the Office of Letters and Light, designed specifically as an opportunity for you to splatter your creative juices over a one-month-sized canvas and see what emerges.  Sure you’ve got a novel inside you somewhere, goes the NaNo logic, but unless you’ve got a goal and a deadline, when are you actually going to sit down and write it?  Probably Never is when, figured Chris Baty, the handsome and hilarious founder of the worldwide phenomenon.  So he sets you a goal — 50,000 words — and he sets you a deadline — thirty days — and then on November First he basically says “Go!” and jumps out of the way, leaving you and the novelist inside you to find your way to the finish line, through plot holes and panic, jitters and genius.

If fifty thousand words sounds quite short for a “novel” to you (it is), you’ve probably never tried to crank one out in a month, and besides, “Novella” doesn’t pack the same motivational oomph.  And you’re not churning out a novel that anybody’s gonna want on their shelf, at least not on December First.  At the rate of 1,667 words per day, every day for a month, there’s no time for polish or perfectionism; there’s barely time to hurl the words at the page with enough force to get them to stick.  Which is the whole point.  If you sit down at your desk expecting the next Great American (Australian, Icelandic, Namibian) Novel to flow forth from your fingertips, you will hurl your laptop dramatically from your neighborhood’s highest point in a fit of frustration before you finish the first paragraph.  Exceptional literature does not magically appear on the page, but nor can you edit what has never been written.  The driving force behind National Novel Writing Month is the idea that the only way to stifle your inner editor long enough to actually get something written is to produce words, be they pig slop or pearls, faster than he can critique them, and let him worry about cleaning up your mess after you’ve finished making it.  It’s fun and exceptionally freeing to type whatever’s in my fingertips, and to get to tell my inner editor “hush up” when it comes out crap.

Maybe you don’t want to “be” a writer.  Maybe you have no interest in the process of editing, rewriting, and polishing; of querying, submitting, and collecting rejection letters.  Maybe you’ve got a story that you’re dying to tell but that you have no desire to try and sell.  My very favorite part of National Novel Writing Month, and the reason I do it year after year, is the fact that it’s a giant (21 participants in 1999, 256,000 in 2011) and truly global community that comes together to celebrate and create Art for Art’s Sake.  My very first NaNo novel has been polished to the point that it will be published this year (also, excitingly, in November), and I have another in my digital drawer that is almost ready for the world, but I also have two NaNo novels — including the one that has, to date, been the most fun to write — that will never see the world outside of my hard drive; awesome and imperfect pieces of sloppy, slap-happy art whose very existence is its own reward.  The one I wrote last year is an almost irredeemable piece of crap, and I was happier to cross the 50K finish line with it than I have been in a long time; I learned (and re-learned) lessons about humility, creativity, motivation and muddling through to which only this wacky adventure could ever have given me such easy access, and I got to quaff enough coffee to ferry a freighter through the Panama Canal while learning them.

Nobody expects you to write 50,000 words in a month all by yourself.  The NaNo website is loaded with forums and blog posts and pep talks designed to inspire and energize, or just make procrastinating more fun, and Write Ins, where wild-eyed writers with laptops rain down on libraries, bookstores, and coffee houses, take place across the country and around the world.  Even my first year, when I did write “alone,” my cousin read my daily output and cheered me to write on.  Her brother wrote with me the following year, others of our cousins in the year that followed; last year our Facebook group of NaNo superstars included almost 20 friends, co-workers, cousins and uncles, and this year I’m beyond excited to finally welcome (drag, whatever) my husband, who hates to read, even, into our noveling family.  I have only the tiniest inkling of an idea for this year, and am tempted to trot out a gimmick, like telling the whole story through letters, or only writing action scenes, or setting the entire novel in a small apartment.  Since I first ventured into high-octane novel writing in 2006, I have wanted to wake up one November First without a novel idea and sit down at the keyboard and see what spills out, and this could be that year — talk about a gimmick!  Now that I have started publishing, I feel the need to keep one eye on the eventual marketability of any idea I may pursue, but I have resolved to take this up with my Inner Editor come December.  For November, my only goals are to write for the sake of writing, drink way too much coffee, and celebrate the release of my First Novel with the reckless and rollicking ralphing up of my next one.

10 Reasons You Should Do NaNoWriMo