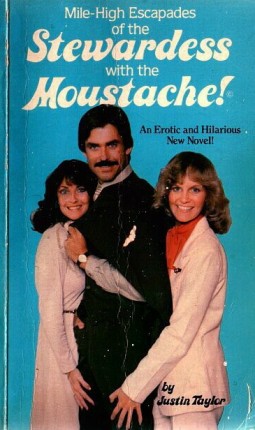 One thing I like about my job (and you knew there had to be something): it’s a big hit at parties.  You tell people you’re a writer, and they look at you like, Yeah, right.  “I’ve never heard of you,” they seem to say, “and you’re obviously not a millionaire, so you must not be a very good one.  I have to… turn this way now.”  In other words, as Geena Davis said of Lori Petty in A League of Their Own, go pull someone else’s leg; mine are long enough already.  But people perk right up when they get a hold of a flight attendant in a social situation.  Some people say, “Oh, I always wanted to do that,” and others say, “Yikes, I could never do that.”  But everybody’s got an idea about what this job is like — some more realistic than others — and everybody’s got an opinion.

The first order of business (alas) is usually to hold the flight attendant personally accountable for one’s last airline-related travel debacle.  (I especially love when people carry on about the absurdity of their latest mechanical delay.  Cuz they’d presumably rather fly on an airline that doesn’t fix their airplanes when they break?)  And then come the questions: “Why are flight attendants so old?”  (Cuz they’ve been doing it a long time.)  “Why are flight attendants so cranky?”  (Probably cuz people are always asking them “Why are you so old?”.)  “What’s the craziest thing that’s ever happened to you on a flight?”  And that’s the fun one.  Partly because the answer is always refreshing itself.  Only one thing?  How do I choose?  There was the lady who demanded first aid oxygen because she requires supplemental oxygen when she travels in coach (but not, she took pains to note, when she travels in First Class); there was the lady who insisted that I force another passenger to surrender their aisle seat to her (young and perfectly able-bodied) son, and then called me an asshole — from the comfort of her aisle seat (“Never mind where I’m sitting!”) — when I forbore.  There was the passenger who tried to initiate an evacuation, alarm and all, inflight; the passenger who took off his pants during boarding so they would maintain their crease between London and San Francisco; the passenger who accosted me in the galley and asked me to officiate at his Mile High Club initiation.  I’m still talking about the middle-school girl who called me “Mister Stewardess,” and she’s probably grown with her own kids by now.  They’re always up to something, these people, and one thing for which a flight attendant is never at a loss is cocktail party small talk.  I’ve got funny ones, scary ones, romantic ones, really gross ones — what are you in the mood for?  “Wow,” someone will invariably say, seeming to forget that they didn’t believe me fifteen minutes ago when I said I was a writer, “you should write a book.”

What I should have done was keep a journal from the day I started flying.  Most entries would be boring and tediously repetitive — went here, ate at Subway, then went here — but the good stuff would be in-the-moment, fresh

and real, and, heavily edited, would probably give an interesting overview of One Man’s Career.  But, since Trudy and Rachel first Told All in Coffee, Tea, or Me? in 1967, there have been dozens of books published by flight attendants recounting — often hilariously — a Day in the Life.  Of these, my personal fave is The Company We Kept, by Jay Koren, who flew for Pan Am from the rickety DC3 days, through the glam and the glory of the Jet Age, right up to the ignominious end.  To hear him tell it, he left no corner of the world unexplored, no celebrity or royal unpampered.  He’s not the greatest writer in the world, but he’s certainly entertaining enough, and he’s been everywhere but the electric chair and seen everything but the wind, as my father would say, and his is one of the few stories (if not the only one) from the true glamour days of flying told by a gay guy (if a painfully discrete one).  And I would certainly not be the first to pen a manual of flight attendant pet peeves, although I’m confident I could wring out one of the longer and more comprehensive volumes on this topic.  But when I get to whining about passengers and counting the ways they (often unwittingly) annoy me, I can come off as, well, rather peevish, and there are only so many pages of that through which your average reader (and, frankly, I as their author) would be game to slog. 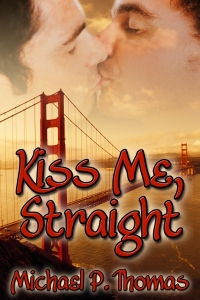 But still I figured there was a book in this wacky adventure somewhere, and when a psychic on the airplane approached me unbidden and gave me permission to set aside my fear and follow my passion, and my best friend encouraged me to shut up about “next year, next year” and sit down and try National Novel Writing Month already, that book at last revealed itself to me.  Kiss Me, Straight is by no means autobiographical; I don’t come from Nebraska, and I don’t have that great of an ass, for starters.  But it is about a flight attendant, and  Todd’s flying life is absolutely inspired by some of the things I love about flying.  By places I’ve been; by Great Walls I’ve climbed; by boys I’ve laid awake nights lusting after (I haven’t always been partnered, after all).  It’s fiction, of course, so I also got to fancy up his airline job in ways that I might never get to with my own: he holds the trips that he wants, his layovers are long and fun, his uniform is handsome and stylish — none of these things are real, for Heaven’s sake.  Certainly not at my airline.  Certainly not anymore.  But he also tries to stay out of the aisle when he’s working.  He’s tired a lot.  He often does nothing on his days off.  By itself, jet lag isn’t a super-interesting topic for a book, but if you want to know what a flight attendant’s life is really like, you gotta be ready for naps.  Lots of naps.

For Todd, as for so many of us, flying is ultimately Just a Job.  He enjoys it, and he gets up to some fun on his trips, especially on the Sydney club scene and sightseeing in China, but his story is not one of annoying passengers or sex-crazed pilots or the Glamour of Life Among the Jet Set.  It’s about his amazing group of friends, and about falling in love with the wrong guy; it’s about finding his way the best he can to someplace he really wants to be, which turns out to be a place no airplane can take him.  So when someone’s laughing at my stories about cooking the fruit plates in coach or artfully arranging passenger leftovers to create a pilot’s meal and says, “You should write a book,” I say, “I have.”  It’s just not what you’d expect it to be.  Which, come to that, makes it pretty much exactly like life as a flight attendant.

Kiss Me, Straight is published by JMS Books.  The eBook is scheduled for a November 4th release, with the paperback to follow later in the month.  You can read an excerpt on the JMS website, you can add it to your Want-to-Read pile (and enter to win a copy!) on Goodreads, you can Like it on Facebook.  And you can definitely come back to this blog on or after November 4th for details on where and how to get your very own copy.

3 thoughts on “You Should Write a Book”