The Tastykake Incident, which would have been unmanageably mortifying with pretty much any other flight attendant I’ve ever flown with, was actually quite hilarious in context, and I am not ashamed of it in principle. Sanchez and I had bonded over our common body image issues and love of snack cakes in general, and what happened on the flight from Minneapolis to Denver seemed almost inevitable in its poetic timing. But it would be OK with me if even once in a while he could say hi to me without telling everybody within earshot all about how we broke the jumpseat. END_OF_DOCUMENT_TOKEN_TO_BE_REPLACED 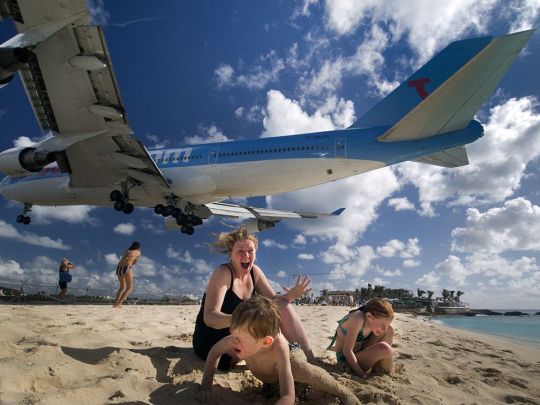 I have about twenty different renditions of the song on my iPod, sung by everyone from Sarah Vaughan to Angelique Kidjo: “Summertime, and the living is easy.”  Yeah, well, this is my sixteenth summer as a flight attendant for a major airline, and I am pretty sure those lyrics didn’t come to George Gershwin on an airplane. For nine months a year, airplanes are filled with seasoned travelers and million-mile frequent fliers who more or less “know the drill,” and flight attendants pretty much know what to expect.  The off-season traveler means business: he’ll get on the airplane balancing an open laptop and talking on his cell phone, clog up the aisle while he fills up an entire overhead bin with his oversized carry-on bags, and then sit and make comments to the flight attendants about how people need to hang up their cell phones and travel with smaller bags and the boarding process will go more smoothly for everyone.  These passengers breeze through security with slip-on shoes and TSA-approved toiletries, know exactly what they want to drink and how much it will cost, and can be counted on to have the laptop fired up from way before we tell them it’s OK until way after we tell them to turn it off, some of them hard at work, most of them watching Family Guy on DVD.  They don’t bother us, we don’t bother them (certainly not with “service,” not these days), and everybody’s happy.  I’ve got an Us magazine to read, after all. END_OF_DOCUMENT_TOKEN_TO_BE_REPLACED

Trust me, I’m as surprised as you are.

OK, it’s not quite as dramatic as it sounds; he’s not an actual girl.  He didn’t secretly begin life as one, nor is he in the process of transitioning into one.  But he has started dressing up as one for fun and profit, and it’s taken some getting used to.  We spend a lot more of our disposable income on makeup than we used to, for one thing, and there are feathers everywhere.

Last summer — our eighth together, mind you, with nary a whisper of “I want to be a drag queen” in the interim — we were glued to Season Three of RuPaul’s Drag Race on Netflix.  Jared has seen every season, but I have not.  I have only seen Season Three.  Over and over again, because RPDR is produced in such a way that I am riveted to every episode, even if I’ve seen it several times before.  Knowing the outcome before we even sit down to watch a given episode, I’m still on the edge of my seat by the second commercial break, yelling my commentary and critique at Jared, at the television, and all up and down Facebook each time, because my ideas and opinions stay fresh like that.  (Don’t roll your eyes at me.)  Raja totally deserved to win, but I still root for Alexis Mateo each time around, just in case RuPaul does Drag Race like the movie Clue and there might be a surprise ending.  But really, as long as they keep sending Carmen Carrera home, I’m happy. END_OF_DOCUMENT_TOKEN_TO_BE_REPLACED