Sitcom sensation Felix Medrano is America’s Sweetheart. When he throws a star-studded surprise party for his sweetheart, beanpole barkeep Grover Shepherd, it’s a smash, save for one detail: Shep is a no-show. Felix plans to propose, but with no Shep, can he still get a Yes? 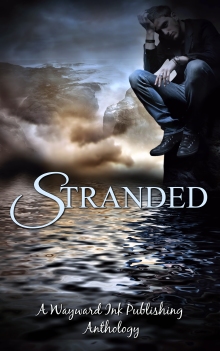 I’m new to Wayward Ink, who are themselves sort of new as a brand to the world of publishing. When I saw the call for submissions for Stranded, I was immediately intrigued, and made a series of laborious efforts to turn the theme on its ear. “Stranded how?,” several of my scribbled notes demand. Would I maroon one lover from another metaphorically, like by making one of them straight or married or can’t-take-a-hint? Would the separation merely be physical, as from a desert island or the wrong side of a lava flow, or should their obstacle be insurmountable, like time travel or the variably discernible line between fact and fiction? Oh, how I wanted to be artsy and brave…

Then one day, as I strolled through one — watching people scratch and claw and bargain and beg their way onto an airplane, any airplane — I realized: the only time I ever truly feel adrift, as in irretrievably removed from my life and my friends and my sanity — really and truly Stranded — is when I’m sitting around an airport on standby with no prospects and no viable plan for getting out. And so I played with that idea, and with this character called Shep, and with ways he might get stuck. But I wanted him to really feel stuck, so I tried to write him a quality romantic partner of the kind that one might badly miss while cooling one’s heels in the Houston airport, and by the time Shep started noticing Felix I was practically head over heels for the guy myself.

“Say Cheese” is the story, told partly through pictures, of how they met, how they fell in love, and how fate and a crazy best friend and a low fare airline seem determined to keep them apart. I love it. I’m thrilled to be a part of this anthology, in the company of warm, supportive, well-regarded writers, and I hope you’ll check it out and love it, too.

Buy Stranded direct from Wayward Ink here, or on Amazon. Buy it today (or anytime this first week) and enter the giveaway to win fabulous prizes!

For a short excerpt from “Say Cheese,” please read on:

What Shep was most excited about was getting on the plane back to L.A., but all of his shit was in the trunk of Billy’s car, which some bottle-blond twink in a tank top had just jacked from in front of the IHOP while Shep was paying for Billy’s breakfast. In heavy traffic, the IHOP was forty-five seconds away from the Louis Armstrong airport. Even accounting for their late start—never mind Shep’s howling hangover, Billy was still half-drunk—stopping to load up on pancakes hadn’t cost them much in the way of valuable time. But they’d built in very little car chase cushion, and Shep was more interested in his watch than what was happening on the road in front of them.

As, apparently, was the driver. At least the car he rear-ended was Billy’s. The buddies scrambled from the backseat into traffic in time to see Tank Top and his bloody lip bail out of Billy’s car. He whirled to accost them, oblivious to the horns and middle fingers popping off like popcorn.

“Seriously? You just ran into me?”

“I’m okay.” The cab driver’s declaration was muffled by the air bag that had blown his glasses off.

“You’re one to talk about stealing,” Tank Top cried.

“What are you talking about?” Billy asked.

The kid pointed a quivering arm at Shep. “He steals you, I steal your car.”

“You two know each other?”

“Grover Shepherd, Brant Mattachine,” Billy, ever the Southern belle, said by rote. Honking cars inched around them. “Brant, this is Shep.”

“Yeah? Well, I’d rather rob the cradle than the grave.”

“Whatever you say, Gramps.”

Shep turned to his friend. “Really, Billy? Ten years? With those crow’s feet?”