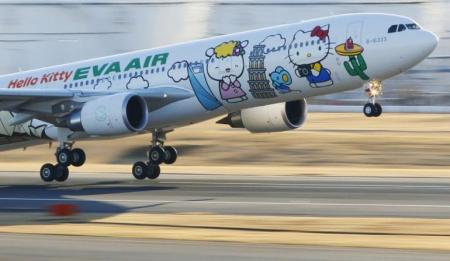 I have recently returned from a short trip to Japan, the land of the glamorous hot bath, pork cutlet curry, and (alas) millions of varieties of instant coffee. It was a work trip (ostensibly), and my “sightseeing” was limited mostly to the sights I could see from my hotel room window (namely the Narita airport, and typhoon Phanfone as she blew by), and yet at the end of six days (there was some Guam involved…) I was so loaded down with mementos I could barely zip my suitcase.

Why, you ask? Because, as you know, Japan is the birthplace and home base of my Souvenir Hero, Hello Kitty, and if she’s on something, I buy it.

We had a Sanrio store at the U-Hills Mall here in Denver when I was growing up, where you could get Hello Kitty pencils and weird candy, but even as a pretty fruity kid, the appeal of some expressionless cat sitting still in her overalls escaped me. It wasn’t until I started running around Japan as a grown man that she revealed herself to me as kind of a bad-ass.

I’ll admit, even now that I’m something of a rabid fan, the depictions of Hello Kitty frolicking with her frog and birdie friends on a plastic pink background are uninspiring. I also think Enrique Iglesias looks hotter in a wet t-shirt in one of his music videos than he does  in a photo in a gossip magazine walking out of a Starbucks in a baseball cap. Of course Stars are Just Like Us! — it’s not the fact that they shop at Target (or, in Hello Kitty’s case, have tea parties or ride the school bus) that make them interesting. Just Like Us (!), at home Hello Kitty’s a snooze. Hello Kitty the Undaunted Adventurer, on the other hand, is completely irresistible, at least to me. 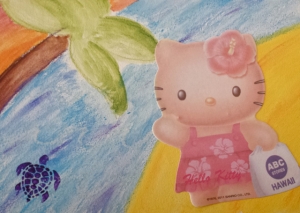 With her unflappable face, she embraces local customs and costumes wherever she goes. She’s proud of her Japanese heritage,embracing the geisha, the ninja, and the punk rock elements of her personality, but is the first to don a beret when she’s in Paris or a Sherlock Holmes outfit in England, or even her sea lion costume when she visits Fisherman’s Wharf. She’s dressed as a deer all over Nara, the erstwhile capital of Imperial Japan famous for its urban deer population; I have a little cell phone charm from Hawaii of her dressed as a sea turtle, and it’s not uncommon to come across her dressed as a bee or a lobster or a panda, suggesting that she is a dedicated steward of animal preservation, and she’s obviously a foodie: I have her dressed as a pineapple and as a Spam musubi. She works hard — I have an assortment of souvies that depict her as everything from a hula dancer to a pilot to a Vegas showgirl, as a peasant farmer and as The Last Airbender — and she plays hard — she surfs, she plays the ukulele, and she shops at the ABC Store, all without knocking her jaunty bow askew.

Refusing to order the “Hello Kitty” off of a kids’ menu recently, my cousin’s ten-year-old daughter was unbending: Hello Kitty is kid’s stuff, and she’s not a little girl anymore. And now that she’s forty, let’s face it, neither is Hello Kitty. But with her sense of style, her eagerness to embrace other cultures, and her willingness to wriggle into a wetsuit or a high-country kilt for a photo op, she’s a helluva woman.