If I haven’t already written here about how the discovery of queer fiction written by queer people rocked my teenage world and changed my young gay life, I probably should. And then I moved to San Francisco, which had a gay bookstore — it’s a miracle I was able to cover my rent.

One of my first finds at that gay bookstore was a book of “Fairy Tales” (get it?), which depicted two men in codpieces on the cover with a castle in the background and was subtitled, “Traditional Stories Retold for Gay Men.” Not every story in it is a masterpiece, but it is a lovingly curated collection, and for a guy like me who was waiting for his prince to come along (Harry Windsor? Felipe Bourbon? That rascally Frederik of Denmark? Each Charming in his own way, and I wasn’t trying to be picky…), it was reassuring to know that being cursed by evil queens and kissing frogs was all part of the process for us, too. Also, modern retellings of fairy tales have enjoyed something of a resurgence these days, and never let it be said that I’m afraid to jump on a bandwagon. 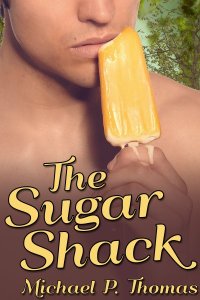 As it revolves around two of my passions, namely free food and fat guys, Hansel and Gretel has always been my fave. I’ve long wanted to write my Big Gay Version of it, especially as one modern rewrite after another has ignored Hansel’s heroic appetite, but how do you “gay up” a story about a brother and sister of which the main themes are cannibalism and child labor? By highlighting the edifying bonds of love within the families that we choose for ourselves and making the witch a chubby chaser drag queen, it turns out. Or at least that’s how I did it. The Sugar Shack is the resulting story. I wasn’t sure I had the guts to write it, and for a while I didn’t have the guts to submit it, but JMS Books believed in it — and put a really hot cover on it — so I’m happy to tell you it’s available as an eBook, starting today!

Hansel is an aspiring photographer. His pal Gretel is a Drag Superstar—or will be, she’s convinced, the moment she’s discovered by…anybody. When they stumble upon The Sugar Shack, Gretel gets a gig and Hansel a new admirer in club owner, drag diva Sugar Rush. Hansel could never love a man who looks like a woman, but he eats everything else Sugar puts in front of him—will he eat those words, too?

Buy it here! All JMS Books New Releases are 20% OFF during their first week on the shelf!

For an exclusive excerpt, read on:

He’d been hanging out at the Sugar Shack on very nearly a nightly basis for months now, and had grown rather accustomed to the VIP treatment that Sugar’s fondness afforded him, but when he returned with Gretel’s big blue hair, he was unceremoniously ushered backstage.

The dressing room was really more of a clearing in a whitewashed storage room; he picked a path through boxes of toilet paper and crates of unpeeled potatoes, guided towards the locker room chatter by the beacon of what turned out to be a wall of lighted makeup mirrors.

“Oh, you’re a dear!” Gretel gasped when she caught his reflection. She rushed him in nothing but some spike heels and a pair of control top hose with kisses of gratitude. “I would’ve been in the soup without this hair.”

“There’s soup?” Hansel teased, glancing around the dressing room in imaginary search of a tureen.

“Honey, you saved the day with this hair. If you want soup, I’ll find you some soup.”

“Watch out, now,” a hairy-chested, crooked-nosed queen in a wig cap turned from atop a stool in front of a lighted mirror to say. “Feedin’ that man’s my job.”

Half in drag, half out, it took Hansel a second to recognize the hard-bodied dude in fishnets and red patent-leather pumps. “Sugar?”

“I’d better be,” she said. “Otherwise I’m gonna be mighty jealous of the way you’re staring at some other guy’s chest.”

“Right,” Hansel said, his eyes riveted to the slab of muscle claiming to be his benefactress. “I just mean… I didn’t recognize you, is all. I didn’t realize you were…”

“So hot?” Sugar teased with a wink.

“Close your mouth, Honey,” counseled an old queen in cowboy boots. “Less you want a mouthful of flies.”

“He could put my fly in his mouth,” muttered the queen to Sugar’s left.

“You watch yourself, Vinda Lou,” Sugar warned her. “This here is our Gretel’s brother. Keep your comments family friendly or you’ll embarrass the poor boy.”

“I’ll tell you what I would do,” Vinda Lou said, raking Hansel up, down, and sideways with her eyes.

“You’ll do nothing and like it,” Sugar said with a playful swat. “Hansel, Honey, it’s gonna be a while yet. Run along back up to The Cage if you want to, or have a seat.” She drew his attention to a side-sagging red velveteen settee in front of a folding screen. “Watch the magic happen.”

“I’ll show you magic,” Vinda Lou said. “I’m fresh out of rabbits, but I’ll tell you what I could pull out of your hat…”

The queens all laughed. “What does that even mean?” Gretel asked.

Vinda Lou shrugged. “There’s a double entendre in there somewhere.”

“Yeah, it’s just like being at a Mae West film festival,” thrust the queen in the cowboy boots.

“Is that a crack about my age?”

“And a pretty good one, too,” Sugar laughed.

“Touché, then,” the older queen acquiesced to general laughter.