Church has never really been my scene. At least not “Church” of the Tuck In Your Shirt, Be Quiet, Now Kneel Now Stand Now Sit Now Kneel variety. Not that I’m against sharing wine and bread as a way to pass the time on a Sunday afternoon, you understand, but I’m gonna want a lot more than one sip, and probably some cheese.

It’s not like I didn’t give it a chance. I rode my bike to church like six Sundays straight when I was in college. Mostly because I had the major hots for Father Greg. He’s handsome and there’s donuts?  Try and stop me. Like every other gay boy who ever saw The Thorn Birds, I even toyed with the idea of becoming a priest. Of living in Rome and talking in Latin; of sharing an ivy-shaded stone dormitory with other mild-mannered, bespectacled youths. Well, you know, mild-mannered until lights out, when they would naturally drop their black robes to the floor in a puddle and let the moonlight trickle down the ridges and pool in the curves of their milk-fed, muscled bodies. Farm-raised bodies from across the world, in every hue of brown, of gold, of pert-bottomed pink… It was Passion that drew me to the priesthood alright, but not one for going to church.

I certainly believe in the Wonders of the Universe, and have seen too many blossoming cherry trees, spewing volcanoes, and giggling babies not to believe that a Creative Force is hard at work in the world. I’ve just never been convinced that the best way to glorify this Force and to celebrate these Wonders was to gather inside a boring old building once a week and struggle to stay awake through Reverend Lovejoy’s lecture on Constancy, sweet constancy.

Not that all churches are boring, of course. Gaudí’s unfinished Sagrada Familia, while not the most interesting of his Barcelona buildings, is certainly eye-catching, and La Sainte-Chapelle is widely renowned as one of the jewels of Paris (if one of her fakes, seeing as how it’s mostly glass…). And then, of course, there’s Powell’s City of Books. END_OF_DOCUMENT_TOKEN_TO_BE_REPLACED 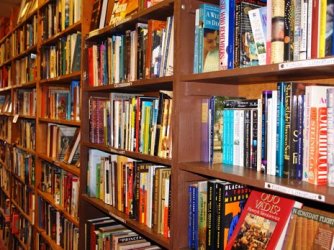 You would think that by now I would know better than to pack all of my flying into the can of worms we call “Summer.”  Jam-packed airplanes, glass-ceilinged terminal buildings that simmer like crock pots, unaccompanied kids in droves and cancellations galore, and for some reason, I stack my schedule like I don’t want to miss a single minute of it.  (Santa Fe spas are awesome, after all, but they ain’t free.)   But Summertime flying is a topic for another post.  (Or “series of rants;” we’ll see where that takes us.)  Hard as I’ve been hittin’ it the last couple weeks, though, it hasn’t been all bad.  As I’ve mentioned in posts past, I am a mad fan of the downtown layover, and of all of the diversions they provide, and I have lucked into a few of them lately.  Cute cafes and boys in shorts are but the first two things that leap to mind as being more plentiful and more fun in a City Center than at airport-adjacent lodgings, and my pro-cafe, pro-boys-in-shorts stance is longstanding and unambiguous.  But last week, on an unexpected and uncommon trip with not one but two downtown layovers, I reconnected, at long last, with one of the best things about being a writer who flies: America’s Bookstores. END_OF_DOCUMENT_TOKEN_TO_BE_REPLACED